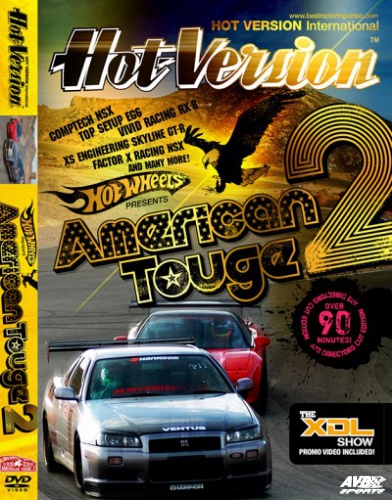 Volume 7
After the success of the first American Touge DVD, Zigzag Asia conducted an open casting call for US tuner cars to appear in the sequel AT2 to be tested and driven to the limits touge style by Keiichi "Drift King" Tsuchiya and his protégé Yasuyuki Kazama. 33 cars divided into 4 different classes were chosen to battle it out to challenge last year's "Touge Monster", Comptech NSX. Hotties Kazumi Kondo and Verena Mei co-host the show.

Cars were divided into NA RWD, Turbo RWD, FR and AWD classes. Promising contenders from the first American Touge such as Hasport, Top Setup, Techno Toy Tuning, Vishnu and XS Engineering were there to avenge the Touge Monster title. Cars from grade A tuners such as the Mullerized EVO and AEM Civic Si were newly chosen along with several privateers with hopes they may have some surprises.

The Hot Version International AT2 is 90 minutes long with more detailed footage of American Touge 2 compared to the JDM version which was released earlier in Japan.

This product is universal.

Do you wish to receive View products about this product? Please fill out the form below.

To top of page